Saturday the 5th of November 2016 I attempted to break the Guinness World Record in most martial arts throws in 1 minute. The current record was 65 persons, and I intended to throw more than that. The Guinness Book of World Records had pre-approved my World Record attempt. Due to circumstances I had to throw competitors and parents that attended a Tae Kwon Do competition. Most of them have never been thrown before and did not know how to.  They showed good sportsmanship, high spirit and agreed to join my record attempt.

To help me in the attempt I had Grand master Shihan Francisco Melendez (8. Dan TKD and 4 dan Acudo ryu) that allowed me to intent at “Copa Jack Huang 2016” in Deportiva Juan de la Barrera “Alberca Olympica”. In the preparations for the record I had a training attempt in the Escuela Mexicana de Acudo ryu/ Escuela Mexicana de Tae Kwon Do. At trainings Professor Shoshu Jose Alberto Vilchis Salinas (4 dan TKD and 2 dan Acudo ryu) offered me to use some of his students from Universidad Tecnológica de México ”UNITEC sur” Mexico City; without this help I would have entered the record attempt totally blind. Beside this help he also gave me tips and directions that played out perfectly for me. At the day of the attempt Grand master Renshi Horacio Melendez (6 dan TKD and 5 dan Acudo ryu) arrived with some key students and gave me an important helping hand on the record arena.

To attempt a Record Guinness you need to fill many formal requirements; among many Timekeepers and Witnesses. In this attempt I had four key witnesses Master Sensei Alonso Rosado Franco (6 dan Han Mu Do and 2 dan Aikido) as the Expert witness of many reasons first he is one of THE most important persons within Mexican martial arts, Champion from the Hapkido World Championship in Korea, Martial arts coordinator from films, Martial arts instructor for police and others, Super high level within martial arts and Founder of the excellent magazine Katana to mention some of his merits. The main reason Master Rosado were selected were that he is simply an excellent person; personally and professional. Master Rosado served as expert and judge, but he took control of the record attempt and really arranged everything.  My deepest respect for Master Rosado, without him the whole attempt would perhaps have fail before really starting. According to the requirements of Guinness they wanted an accounter present. At this attempt we had Accounter Fernando Gonzaga Gonzalez present. In this Guinness attempt we also had two more witnesses Film Producer Eduardo Ramirez and Journalist Blanca Morales. These four persons were the official Guinness World record witnesses. As timekeepers we had psychologist Jasmin Alejandra Mejia Laguna and Grand master Shihan Francisco Melendez. Both very experienced timekeepers from Tae Kwon Do competitions with a long reputation. These two persons constituted the official Guinness World record timekeepers.

Master Rosado encouraged people to join in the event to be thrown and 48 persons from the audience joined in the record attempt. After a short introduction (class) about how to fall given by Master Rosado they were put on three lines on a tatami; a tatami that had the exact measurements corresponding with the Guinness requirements. A time signal was given by the timekeepers and I started the throwing using O Soto otoshi. I managed to throw 66 persons in 60 seconds. Three times during the attempt I had to adjust the throwing due to that the people had moved out of line or have turned their body; I were forced to throw one person using another martial arts throw (ko soto gari) due to this. One person I could not throw because he started to walk and had moved far away. In one case I had to throw a person using my passive leg. A lot might happen in 60 seconds. When 60 seconds were out, the Timekeepers made a signal to signal that the attempt was finish. I did throw a couple of persons more just to be sure that I did not mishear. These persons weren’t counted in the 66 persons that were thrown in the record attempt. 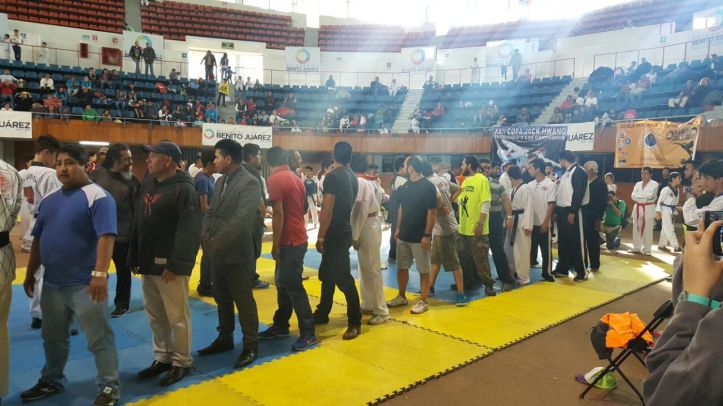 After the attempt the witnesses concluded with 66 valid martial arts throws within 60 seconds, and the previous record was 65 persons. The manual count and video have been counted and revised many times. The amount of martial arts throws is 66. This indicates that this were a NEW GUINNESS WORLD RECORD. Due to the rules of the Guinness World Record book we have to wait for their verification. Before we receive their acceptance we have an unofficial Guinness World Record. Guinness estimates about 4 weeks until we get the final result. Let us wait.

No matter of the outcome of the evaluation of Guinness I send a great thank to all that made this Guinness record attempt possible. First of all, I send my special regards to my family; My wife Subdgeidi and my four children Maximillian, Alexander, Christoffer and Nils Patrick, I also send my regards to my parents Solbjørg and Einar, and my sister Sonja. Of course I also send my thanks to Grand Master Shihan Francisco Melendez, Grand master Renshi Horacio Melendez and Master Francisco Melendez Jr for their everlasting support.  I also need to mention my friend and Shoshu Jose Alfredo Vilchis for his energy and motivation. At last but not least I will send my regards to my first Judo-coaches Steffen Kirknes and his wife Unni Kirknes that thought me my first Judo throws in Selbu, Norway; my later judo trainers were Johnny Roaldseth (Trondheim, Norway), Jens Aassved (Trondheim, Norway). My first kung fu trainer Sifu Dang Tieu Diep (Trondheim, Norway/ Vietnam), Sifu Wang (Beijing, China) and Sifu Liu (Beijing, China). I would not maintain my interest for martial arts without the fresh breath of Konstantino Dimitropoulus (Gold coast, Australia), Shihan Francisco Díaz García and the motivating words of my Judo mentor Saburo Fukuhara (Japan). I also send my thanks to my mentor and grand master Sifu Shi Xing Jun in the Shaolin temple (Lueyang, China) where I occasionally have trained. I also use the occation to express my thanks my friends the Shaolin temple Abbed Shi Yong Xin and Kaiso Frank Dux (The man behind the film “Bloodsport”).  Many of the above mentioned persons have opened my eyes to martial arts, made me study harder and grow for 35 years within martial arts.
Many years ago (like in another life) I went on my first Judo training camp in Frøya, Norway “Frøyaleiren” with a friend of mine, Per Jørgen Weisethaunet. We were young (still in primary school) and very inexperienced. The truth is that I did not like judo throwing that much before that camp, but my first training camp changed my opinion; it motivated me. Looking back from where I am today I see 35 years filled with martial arts. I am grateful to my parents for accepting me to use my time as I have. Thanks to all I have met on my journey within martial arts.

Please put yourself goals in life; dream. I got an idea some months ago that I wanted to throw more people than anybody in the history have done before me. And I did! Decide what you want to do and do it… Don’t only think, act. If I can do it, you can…